Today is Mom’s birthday and today First Lady Barbara Bush passed.  These women were of an era gone by.  Mom bought and sold over 40+ houses/homes over her lifetime. I remember Dad looking at a house and having to make a decision on to buy or not and fretting over Mom’s approval since she had not seen the house. And that was after 40 years of marriage! Mom did it all; cooking as in a master chef, fabric as in pillows and samplers and needlepoint and the stuff coyote with catus that she created, painting, raised 3 sons and lost one, played piano and the most beautiful voice.  Mom and Dad met when she sang and he played in a band back in the 40’s.

I had a chance to see and photograph the Bush’s when they were campaigning.  What I was always impressed with them was how down to earth they were.  At a debate held in Cleveland I remember Dad Bush heading out one of the cars waiting for them and hanging out, kinda lost wondering where everyone was.  Just very nice real people.

So in someway on my Mother’s birthday it would be nice to think she is there to welcome and guide Mrs. Bush on her way. 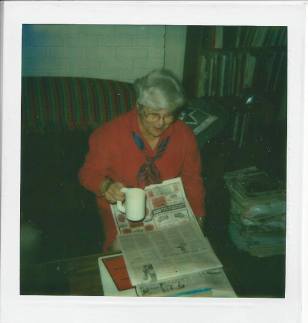